Discusland, as a committed company, has actively participated in how many education programs we have been invited by the Provincial Council, the University of Las Palmas de Gran Canarias, the Official College of Biologists of the Basque Country and Gaztempresa, among others.

It also actively collaborates in the training of the students and teachers of the School of Aquaculture in Mutriku, where every year we teach various courses aimed at each of the groups.

Conference at the Faculty of Marine Sciences of the Canary Islands in 2009: 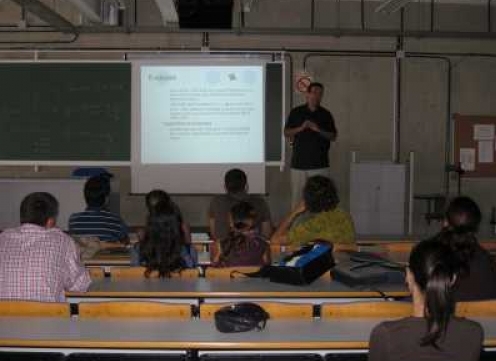 We are members since January 2018 of the IMBRSea consortium and in collaboration with the PIE-UPV who are responsible for the Master "The International Master in Marine Biological Resources", our company will be in charge of giving professional practices to one of the students of the aforementioned Master.

· Generation XXI of EITB2, presented by Txetxu Ugalde and invited by the Provincial Council of Bizkaia. In this program we were the second best innovative company in the Basque Country.

We are very active in social networks and specialized forums. Essential to be visible around the world and generate positive news, synergies within the sector, being close to consumers and the society interested in aquariums in general.